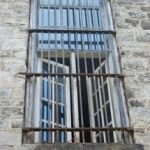 Though state law varies greatly, many states including Arizona restrict or remove the right to vote from persons convicted of felony criminal charges.

A recent report by criminal justice reform group the Sentencing Project estimates more than six million Americans will be excluded from voting in the upcoming presidential election, though only about 1/4 of that number is currently incarcerated.

The proportion of people who cannot vote due to felony convictions is estimated to be significantly higher among minorities, thought by authorities on the subject to be due to disparities in sentencing.

For a closer look at this story and the details of the Sentencing Project report, please see the New York Times article below: