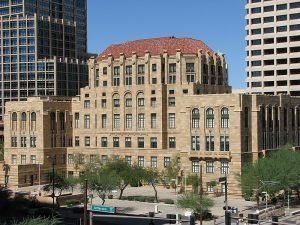 Does Arizona law require a driver to be sentenced to a mandatory minimum of 4 months in the Department of Corrections for a 1st offense, non-accident, regular DUI occurring on a city street, when aggravating factors such as a minor child in the vehicle or the driver’s having a suspended license are not present, and even when the driver was not impaired?  The current answer is, Maybe.

A driver who drives the wrong way on a freeway while impaired creates a dangerous hazard for themselves and others.  In 2018 the Arizona Legislature enacted 28 A.R.S. § 1383.A.5, which makes it a Class 4 Felony with a mandatory minimum sentence of 4 months in State Prison to drive on the wrong side of a “Highway” while impaired.  Arizona Department of Public Safety (DPS) Director Colonel Milstead testified before the Legislature in support of the proposed law.  The DPS primarily patrols Arizona Freeways and high-speed highways.  Colonel Milstead said that in 2017 the DPS made 72 arrests for DUI when the driver was driving the wrong way on a highway.  53 of those arrests were as a result of an accident and 18 people were killed in those accidents.  The average Blood Alcohol levels for the 72 arrests was .160%, and for the accident cases, .189%.  47% of the 72 arrested had a prior conviction for DUI.[1]  Driving the wrong way on a freeway while highly impaired is clearly a danger.

This new law is a dramatic escalation in penalties because it changes the penalties for conduct which could otherwise be classified as a Class 1 misdemeanor with as little as 1 day in jail to a Class 4 Felony with a minimum of 4 months in the Department of Corrections.  The only difference between the misdemeanor and the felony is that the impaired driver drove on the wrong side of a “highway”.  To rephrase, if the roadway was not a “highway” then the penalty could be 1 day in jail, if the roadway was a “highway” then the penalty could be 4 months in State Prison.

Unfortunately the Legislature made a serious mistake when it passed this legislation, because it never made clear what roadways are to be considered a “highway” and which are not.  Are all roadways “highways”, and so the law applies to impaired wrong way driving on all roadways or does the law only apply to driving on some roadways?  In the absence of a definition what roadways are “highways” judges and juries have no clear guidance which roadways are “highways” and which are not.  Since this distinction alone makes the difference between a misdemeanor conviction with 1 day in jail and a felony conviction with 4 months in State Prison, this oversight by the Legislature was a big mistake.

Exactly which roadways are “highways” is not always clear in law.  The word “highway” is used 441 times in the Title 28, Arizona Transportation Code, yet nowhere in Title 28 is there a definition of “highway” which would apply to this new law.  For example, in 28 A.R.S. § 621, which makes moving violations and crimes applicable to all public roadways, the word “highway” has been held to mean all public roadways.          In contrast, 28 A.R.S. § 101.64 defines the width of the right of way for a “Street” or “highway” and by using the disjunctive word ‘or’ implies there is a difference between what is a “street” and what is a “highway” but that distinction is not made clear.

The ordinary common language meaning of the term “highway” is also confusing because it can mean a “main roadway” or “any roadway”, as can be seen from these three dictionary definitions:

To add to the confusion, the Legislature’s staff gave conflicting descriptions of what they thought the Legislators meant by the word “highway.”  The State Senate Staff’s end-of-session Legislative Summary describes the bill as, “Classifies wrong-way driving on a “controlled access highway” as aggravated driving… [5].  The Senate Staff failed to say people can look at the law and are able to tell that the word “highway” means only a “controlled access highway.”  The House Staff’s Legislative Summary is even worse.  Its summary states, “’highway’ as is defined in 28 A.R.S § 101,”[6] but in 28 A.R.S. § 101 the only definition of “highway” is, “.64…the entire width between the boundary lines of every way if a part of the way is open to the use of the public for purposes of vehicular travel…”, which does not help in determining what roadways are “highways” and which are only “streets.”

Although the Legislature did not include a clear definition of “highway” in the law, in their discussion about the proposed law the Legislators were very clear about what roadways they intended wanted to be classified as “highways” for this new law. The legislators repeatedly stated the new law was meant to apply to “controlled access highways”, and so when they said “highway” they meant “controlled access highways.”  In the Legislature’s deliberations the term “highway” was repeatedly described as meaning a “freeway” or a “controlled access highway”.  House Representative Eddie Farnsworth was the Bill’s main sponsor.[7] Rep. Farnsworth repeatedly stated the bill applied to a “freeway.”   On January 31, 2018, Rep. Farnsworth told the House Transportation and Infrastructure Committee the bill, “creates a new aggravating circumstance of driving under the influence and entering a freeway driving the wrong way”. He also said, “the intent of the bill is to discourage people from driving under the influence but a severe enough penalty that if they enter onto a freeway driving the wrong way that they will think about driving under the influence.”[8] At the same hearing Rep. Cook said,

I too had concerns about what happens to Grandma and Grandpa that maybe off their medication that you know turns down the wrong way…  I’ve been convinced by the amendments that the change in this bill with those are addressed for instance in rural Arizona where you have two lanes one going one way one going the other what happens if you were to swerve on the wrong side of the road and cross the yellow line could you be charged with something higher or a civil penalty those have all been addressed to my satisfaction that that would not be the case and this is specifically designed for the on-ramps and off-ramps.[9]

On February 27, 2018, Rep. Farnsworth told the Senate Transportation and Technology the bill addresses “entering a freeway going the wrong way.”[10]  He also stated the bill addressed to drink to the point you enter a freeway going the wrong way with the potential of killing people[11].  On March 1, 2018, Rep. Farnsworth told the Senate Judiciary Committee the bill created, “…Two crimes, driving the wrong way on a freeway and driving under the influence”.[12]  At the same hearing Senator Worsley said, “…this problem it is horrendously fatal and the accidents were there hurt their dramatically hurt if they live and this is an effort on the enforcement side to make sure that these people are back on the road if they’ve been so wasted that they’ve been driving on the wrong side of the freeway”[13].  On February 27, 2018,[14] a Senate Staff Intern told the Senate Transportation and Technology Committee and on March 1, 2018,[15] the Senate Judiciary Committee the bill, “classified wrong way driving on a controlled access highway as a Class 4 Felony.”

The problem now with this law is because the Legislature passed the law using the general term “highway” instead of the specific term the legislators intended, “controlled access highways” and because “highway” can also mean “any public road,” county attorneys are free to try to get courts and juries to believe this law applies to all public roadways.

Moreover, if this law applies to wrong way driving on all roadways including residential city streets, a defendant may be sentenced to 4 months in State Prison, even if they are not impaired to the slightest degree.  A common myth is a driver must be impaired before they can be found guilty of DUI, however that is not true.  A person is also guilty of DUI if they have any controlled substance within their body and are not taking that controlled substance in accordance with the medical provider’s instructions, even if they are not impaired.  That controlled substance does not even have to be one which can cause impairment.  For example, a person who is prescribed 2 tablets a day of Vicodin for pain and has built up a tolerance to it and so takes 3 tablets on a day.  Because taking 3 tablets is not as prescribed the person was not taking the Vicodin as prescribed and is therefore guilty of DUI even if they are not impaired by the Vicodin.  So if “highway” includes all roadways including residential city streets, then it would apply in this situation: A disabled Vietnam veteran has been taking Vicodin for pain in her left shoulder for many years and has built up a tolerance, and so takes she takes 3 tablets a day and not the 2 tablets as prescribed.  She has a part-time job delivering newspapers in the early morning and to do so drives on the wrong side of residential side streets so she can throw the papers onto the driveway while still seated in the driver’s seat.  By not taking the Vicodin as prescribed she is guilty of DUI even though she is not impaired. If “highway” means all roadways then this law applies to the residential street she is driving on and so she is guilty of Aggravated DUI and must serve 4 months in State Prison.  Clearly this is not what the Legislators had in mind but if “highway” means all roadways then that is what the law would require.

A criminal law must clearly give people notice of what is the prohibited conduct, which for this law means it must inform people which roadways it applies to.  Rep. Cook above this offense does not apply to driving on some roadways but how do we clearly know what roadways the law does apply to and which it does not?  The easiest way to make that distinction clear is to listen to the Legislators who said this law applies to “controlled access highways.”  The reason this distinction can be made is because what is a “controlled access highways” is clearly defined in the Transportation Code.  That definition is “…a highway, street or roadway to or from which owners or occupants of abutting lands and other persons have no legal right of access except at such points only and in the manner determined by the public authority that has jurisdiction over the highway, street or roadway.”[16]  Therefore by limiting “highways” to “controlled access highways” people can look at the definition and clearly know what roadways the law applies to and which it does not.

So, is it possible for a driver guilty in Arizona of a 1st offense, non-accident regular DUI occurring on a city street, when aggravating factors such as a minor child in the vehicle or the driver’s having a suspended license are not present, and even when the driver was not impaired, be required to serve 4 months in State Prison?  Currently the answer is, Maybe. Until either the Legislature amends the law to conform to what they intended it to say or an appellate court rules the law is limited to “controlled access highways,” county attorneys are free to attempt to convince judges and juries that “highway” can mean all roadways so that a DUI driver driving the wrong way on any roadway is guilty of a felony and has to serve 4 months in State Prison.

[1] Testimony of Colonel Milstead at a hearing of the Arizona House of Representatives Judiciary and Public Safety Committee, January 24, 2018, http://azleg.granicus.com/MediaPlayer.php?view_id=13&clip_id=20183 times, *;45 to 17:35.